My top 12 push-ups you can add to your workout to increase muscle, add progression and make doing push-ups more fun 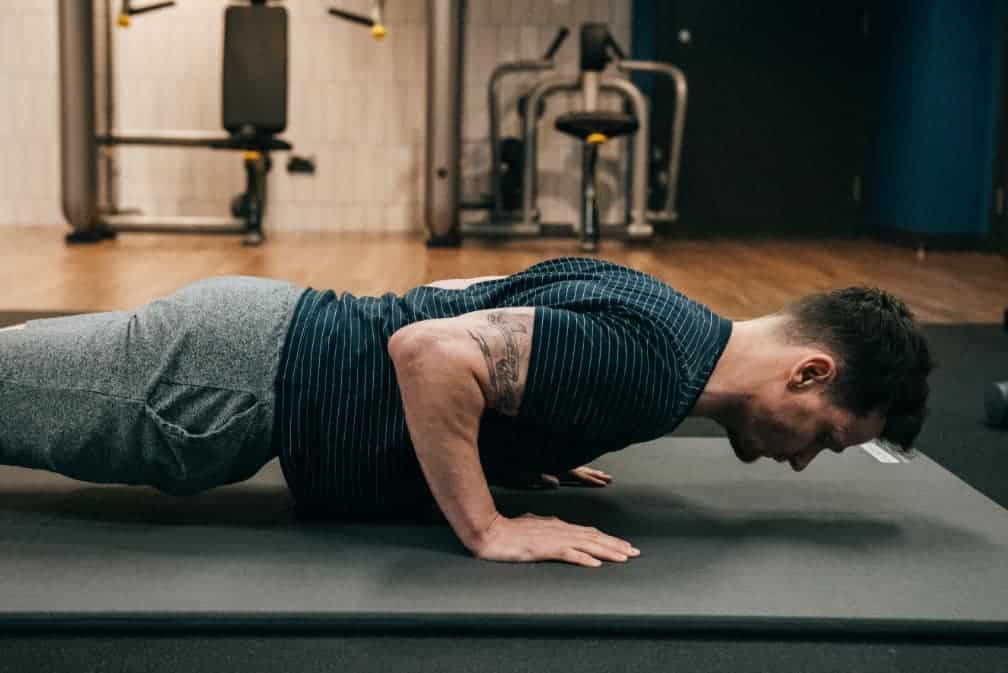 In this article I’m going to give you 12 push-up variations you can add to your workout.

If you’re a guy that’s ever been interested in working out, then it’s pretty safe to assume you’ve tried the push-up before.

It’s given to us in P.E at school, used as a way to show strength to others and even used in contests to win free pizza (which I may have taken part in).

However, there’s a difference between performing a push-up that’s simple and poorly done, and one that’s correct and effective at targeting the right muscles; helping you to get stronger and build a better upper body.

Talk to most guys, and they’ll seem fairly confident that they can perform push-ups pretty well.

But the reality is:

“Most guys perform shitty push-ups and get a false sense of confidence… If I ask a guy to drop and give me 10, I can bet at least 9 are gonna be horrible.”

And I wouldn’t be surprised if you’re one of them.

That’s why we’re going to look at how to do a great push-up (not the ones you’re probably doing right now) and the variations of them to get you stronger and give you more spice going forward.

Although there are already articles out there that give you 60+ versions of the push-ups, this site is all about simplicity and effective training. That’s why I’ve broken down the ones that I consider to be the top 12, and I’ve organised them for you by body part.

The Perfect Push up – A closer look at the push-up.

The push-up, although a basic movement, has a lot going on.

You have to stabilise your body, control your breathing and have the upper body strength to push a large part of your weight up and down from the ground in a controlled manner. It also has similar muscle activation to the bench-press (study) making it the perfect strength and mass builder when including weight, and can help with testosterone production too (study).

Now only that put men who could do 40 or more push-ups have been shown to be 96% less risk of heart problems in the next 10 years than those who can do 10 or fewer (study).

However, to get these benefits you’ll want to make sure you’re actually doing them correctly.

There are typically 2 mistakes I see guys making with a push-up:

Moreover, it’s critical that you learn the proper way to perform a push-up from the get-go because a vast majority of exercisers perform this movement incorrectly. I distinctly remember when I started performing push-ups. I was 15 years old and could barely manage three sets of six repetitions. I’m pretty sure my form wasn’t up to par back then either. Fortunately, I stuck with it and didn’t give up. Fast forward to today, I’m now able to perform 60 non-stop push-ups. A nice fringe benefit of push-up performance is the core stability that comes along with it

Core stability is something most people also miss out on because they make this mistake too:

Rolling the scapula back and forth, leading to a lack of stabilisation in the body.

Not to mention it also has a bunch of benefits for you such as strength and muscle increase in the chest, triceps, and shoulders. Improves scapular (shoulder) mobility, and core (stomach) stability.

They can also be done anywhere – the hotel, gym, airport bathroom (you odd person), you name it.

But how do you actually do them properly?

Why bother with other push-up variations?

After all, if you want to build a bigger chest, isn’t the generic push-up good enough?

Well, it depends on your goal and where you are on the muscle growth (journey) spectrum.

Here are a few reasons why you might want, or need, to do different versions:

If any of the above sound familiar to you, then you’ll definitely want to keep reading…

You most likely think of the chest when you do a push-up.

But depending on the style of push-up you do, depends on the focus of the muscle working.

Although the following push-ups don’t just target the chest (as they’re all multipoint movements) they have more of a focus on this area than other push-ups in the rest of the article.

I’ve also done the job of placing these in an order of easiest (1) to most difficult (5).

When doing push-ups as shown before, you’ll notice that they’re difficult to do, if they’re too difficult to do right now, then this push-up is a perfect transition to them.

The eccentric push-up is very similar to the negative pull-up in that it focuses on eccentric training to build your strength.

This is one you might have not seen before, but it’s a fantastic push-up to have in your arsenal for when you feel you need a bit more strictness to your routine.

I originally came across this through strength coach Christian Thibaudeau but apparently, it originates from a popularity in CrossFit.

“How do you judge push-up depth when dozens of reps are supposed to be done in 30 seconds? The answer was simple: have each push-up start with the body (chest, abdomen, and quads) resting on the floor, and the hands completely off it. This solved the range of motion issue.” –  Christian Thibaudeau

However this isn’t just what the hand release push-up is, some tweaks it becomes an even better, stricter movement that will lead to more muscle growth.

With a regular push-up you lift about 70% off your own body weight.

When you place your feet on the floor in the incline push-up you actually lift much less of your own weight, which makes it a much easier movement.

And as you probably guessed, the higher your hands are, the easier it is to perform the Incline push-up.

For example, placing your hands against a wall and pushing yourself away is the easiest variation and the lower you get, the harder the movement will be to perform.

This is the one I like doing the most.

But they help target the “fast-twitch” muscle fibres leading to greater growth in the pec muscles.

“The clap push-up is a unique exercise, challenging muscle fibres by requiring rapid, explosive contractions while fatigue builds during longer-rep sets. Pursuing this test will bust you through a training plateau, build power, and add muscle to your chest, triceps, and shoulders.” – Eric Bach

You’ll typically find this at the start of a workout program to activate the pecs.

Note: It’s common to feel a bit more soreness on the joints when you first start doing this movement. Don’t worry, most healthy individuals don’t have anything to worry about here.

And it’s done in the exact opposite way to the incline push-up with your body close to the ground, feet up on a platform.

This means you actually push-up even more of your own weight, making this movement the hardest of the 3 typical push-ups (regular, incline and decline)

This is a simple one.

Add a weight to your back and go on to thank me for the mass you’ll add to your chest.

You can add resistance to this via bands or via a plate.

When guys get stronger they stop doing push-ups in their workout programs. This is a great way to bring them back in, with the added benefits.

This section is probably going to be different to what you’re expecting.

I don’t think push-ups should be used as a shoulder-building exercise. In fact, quite the opposite.

Certain push-ups can put stress on the shoulder, but fear not, I have a few push-up variations up my sleeve that – although not designed to build shoulder mass – are here to help with your shoulder mobility and overall health and posture with the upper body.

However, there are two exceptions…

The Pike Push-up is a great way to progress towards the Handstand Push-up.

It’s a great movement to target the core and shoulders. It’s also a variation above the decline push-up, making it even more challenging.

Without a doubt one of the best exercises you can do for the shoulders (and best of all, can be done at home).

However, with that comes to them being one of the most intimidating and difficult movements to get right from the get-go.

Here’s a progression that I recommend:

You most likely have shoulder issues.

“Strengthening with serratus anterior exercises will keep your shoulders mobile and strong, helping you avoid injury and live your active life” – Eric Wong

The serratus anterior plays a huge role in how you move your shoulder and arm, so improving it is imperative to how well your upper body functions.

Also known as the reverse push-up, this is a great movement for the back, and because of that, overall posture.

If you’re pushing (as you are in push-ups and most chest movements) you’ll want to almost always balance things out with a pull (back movement) of some kind.

The benefit to this vs rows is that it can be done anywhere.

If you want bigger arms (well, triceps) then here are some movements you’ll want to have in your toolbox.

Diamond push-ups are quite a leap from the regular push-up (in difficulty) so don’t be surprised if you fail after doing half as many diamond push-ups as you normally would.

This is without a doubt one of my favorite tricep burner movements that will pump up your triceps in no time.

If you’re after a great movement to have during your dynamic warm-up then this is a great place to start.

Since you are only supporting yourself on three points of contact when you move your leg forward you’re working your abdominals (and other core muscles) to work harder to maintain stability.

Moving your legs forward and back also helps to work your lower abs since it mimics the movement used in many abdominal exercises.

To make this even harder on the triceps, opt for a closer grip.

Push ups are a staple move that you’ll come back to again and again (if you’re like me).

Having several push-ups in your toolbox will always come in handy, if you’re training at home or needing to build a stronger, more functional body at home.

I’d recommend sticking with one type of push-up for a certain set and rep scheme and then progressing to the next, more difficult variation

Now it’s over to you.