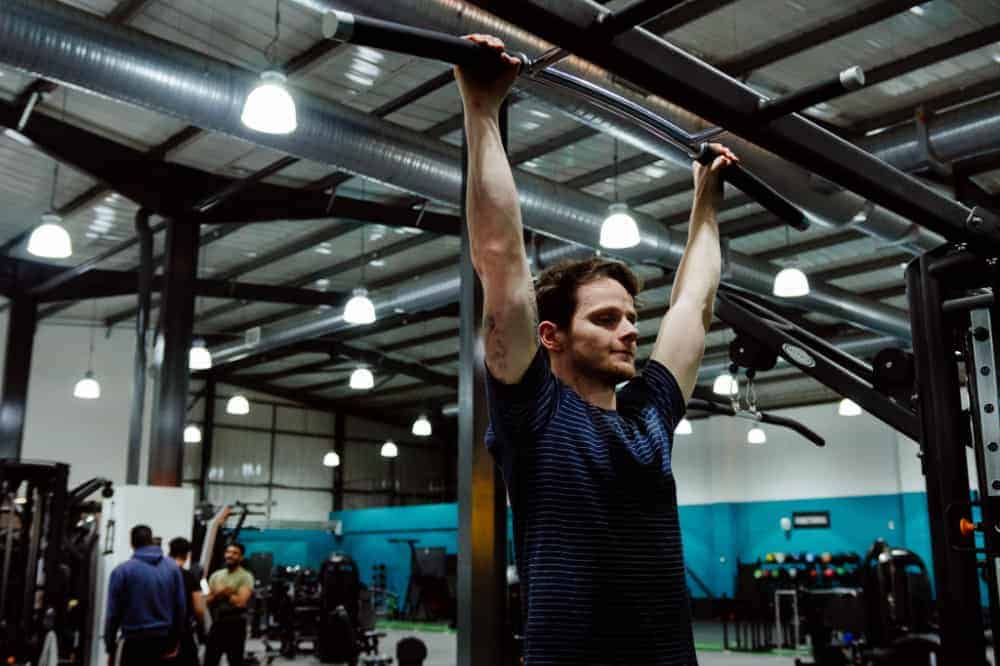 Yet, why do very few actually do them correctly?

They’re known to humble the strongest of guys, and if you’re a skinny guy that’s tried doing them before, then you most likely know how difficult they can be to perform (correctly) especially when starting out.

So why can they be so difficult?

Although most think the chin-up just needs back (and arm) strength to be done well, there are many areas of the body that work in order to get your chin-up to the bar.

That’s why I recommend starting with the negative chin-up …

What are negative pull-ups ​(and negative chin-ups)?

Although some strength coaches like to categorise the chin-up and pull-up as being varied, the negative pull-up and chin-up are actually extremely similar.

The main difference between the two is whether your hands are facing towards or away from you:

Pull-ups are performed with both hands facing away from you in an overhand (pronated grip) with your arms slightly wider than shoulder-width apart.

Chin-ups are performed with both hands facing towards you (supinated grip) with your arms shoulder width or just inside of shoulder width apart from each other.

A typical chin/pull-up normally has all 3 of these …

The negative chin-up is similar to a typical chin-up in many ways, but with a major difference:

1. It’s easier to perform, as it eliminates the concentric part of a movement (the bringing yourself up to the bar).

2. It focuses on the downward (eccentric) portion of the chin-up, which when done correctly, has a tonne of benefits…

“Strength gains after eccentric training appeared more specific in terms of velocity and mode of contraction. Eccentric training performed at high intensities was shown to be more effective in promoting increases in muscle mass measured as muscle girth.”

“But what about the lat pulldown?”

The lat pulldown is a fantastic back building exercise.

And if you can’t do negative chin-ups at all, then it’s a great replacement …

It’s one of the primary movements used in my flagship program course for skinny dudes because it works so well and in the early stages, when your strength might be low, it can help bump it up.

Essentially, by doing the chin-up/pull-up, you’ll be way better off when it comes to strength transferring into real life, and, of course, that’s the same for the negative version too.

Let’s take a look at how it’s performed…

How To Do The Negative Chin-up

01: Stand on a bench/box so your body is in the top position of a pull-up.

02: To provide stability, before each rep, take a deep breath in through your stomach, brace your core, gently tuck your ribs towards the hips so your body is in a slight hollow body position, and squeeze your glutes and cross your legs.

03: Extend your hands above your head, and grab on to the bar, setting your hands so they are approximately shoulder width apart, and your palms are facing you (for a chin-up) or away from you (for a pull-up).

04: Jump and pull your body up to the top position, and perform the eccentric, lowering part by slowly lowering yourself down in a controlled manner by using the muscles in your mid and upper back, and scapula stabilisers.

05. Repeat the movement, either jumping or using the box to get up and then continuing in the same fashion.

Some extra notes you might wanna be aware of:

Keep your back and shoulder blades engaged throughout the entire movement.

Maintain proper alignment the entire time. Your spine should remain in neutral alignment, your ribs should remain down and your pelvis and torso should not rotate.

You can either bend your knees, or keep your legs straight, but it is important that you squeeze your glutes and muscles in your legs as a rigid body will be easier to control.

Now although this movement seems pretty simple, it helps massively with strength and muscle growth in several areas …

What muscles do pull-ups work?

The pull-up’s main target muscle is the lats (latissimus dorsi) followed by the biceps as the secondary muscle – this helps with giving you a much wider appearance (with some guns too).

The biggest difference between the chin-up and pull-up is the activation upon the bicep.

“Biceps brachii had significantly higher EMG activation during the chin-up than during the pull-up.”

However, both do an amazing job at placing a lot of weight and stress on the biceps.

This exercise also strengthens the shoulders, the anterior core and the forearms (through using your grip to hold on to the bar).

What are the benefits of the negative pull-up/chin-up?

“As an ectomorph, how many pull ups should I be able to do?”

As you’re here, I think it’s safe to say you’re a skinny dude, which typically means you’re going to struggle more than most when it comes to strength in the early stages (you’ll soon be a back machine).

Through training guys inside The Skinny To Superhero Formula, we’ve noticed that most are able to hit 8 negative reps within the first 5 weeks and then progress into doing 5 chin-ups.

Once you’ve mastered the negative pull-ups and you’re repping out a solid amount of regular pull-ups, you’ll want to progress on to these variations …

After doing negative chin-ups, you’ll want to move on to a series of different pull-up bar exercises …

Right now, I’m going to walk you through the pull-up (and chin-up) progressions that I recommend the most (that are within reach within 12 months of training).

The chin-up uses an underhand grip. Because of this, it allows your biceps to activate fully, which in turn allows you to lift heavier.

It also allows you to use a larger range of motion, activating even more muscle fibres (including the ones in your upper pecs). These two factors make the chin-up perhaps the best muscle-building exercise for your entire upper body.

This is great for people with shoulder injuries, or if there’s a large gap between your performance in chin-ups and pull-ups (think of it as the middle sibling).

If you’re great at chin-ups, but are struggling to do pull-ups, then it might be because your biceps are strong, giving your back muscles a lot of help on chin-ups.

What does this mean?

Well, with the neutral grip, you have help from your elbow flexors, which helps other muscles catch up, to help with progressing to the normal pull-up.

This is similar to the chin-up, with your palms facing away from you. It also limits the amount of muscles you can use to pull yourself up and allows

you to hit the lower traps a bit harder.

You’ll typically see more bodybuilders using this to bring up a specific weak area of the back, and for skinny dudes, it’s recommended secondarily to chin-ups.

This is the same as the pull-up, the main difference is the placement of your hands. You’ll want to take a wider than shoulder width apart grip.

This movement limits the amounts of muscles lifting you. In fact, most people will see a large decrease in the amount they can perform these vs. regular chin-up/pull-ups.

A chin-up, neutral grip and pull-up are all made difficult by adding weight (using a weight belt – if you don’t have one, hang a dumbbell between your feet, although it’s no way near as nice).

At this stage, you should be able to pick which you prefer, and go for personal preference. Your strength differences between the chin-up, neutral chin-up and pull-up shouldn’t be vastly different from one another.

Putting Them To Work

So there you have it –that’s all about the negative pull-up, and what you can do after you’ve mastered them to build a stronger and more muscular back.

Wondering where this would go in a programme?

I’m excited to see how you use the negative chin-up in your own workout programs.

The chin-up is one of the best moves you can do.

This will getting you doing them properly in no time.