Does it matter where the bulk of your calories fall?

When to schedule your biggest meals, should you skip breakfast and how important is all of this for bulking up? 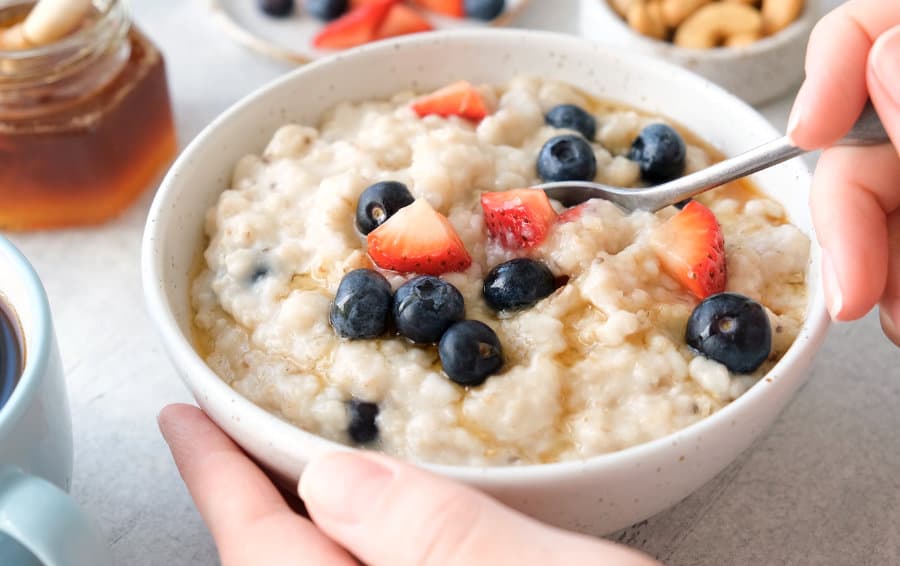 When should I eat?

Does it matter when I consume the bulk of my calories?

Should I skip breakfast?

These are all questions that might cross your mind when it comes to planning your meal schedule.

With trashy journalism pulling studies out to make a headline (like this piece), it’s difficult not to be confused about when the best time is to eat.

The contradictions are confusing. I get it.

That’s why I wanted to do a full breakdown on this topic, so you know once and for all if it’s something you should spend your time worrying about, and what to focus on.

Eating calories at breakfast vs dinner

We’ve been told for the longest time that eating more calories at night makes us fat.

Where did this come from?

Logic would have that if you’re consuming calories/carbs in the evening, and then sitting or sleeping, then you’re not doing anything with them. They’re just sitting there, not being burned, and being shuffled straight into your fat stores.

And some studies even back that up (study) showing that our body finds it more comfortable to burn carbs in the morning, and fat in the evening.

Then the opposite became popular.

So which one is correct and does it make a difference for building muscle?

Is breakfast that important for muscle growth?

If you’re like most modern-day folks, then the morning is where you get your fair of share of carbs in.

Be that in the form of cereal, toast or even waffles.

When most switch to a healthier diet, they change this up with foods like porridge (oatmeal), fruit, or fruit juice.

Breakfast is an important meal to start the day, there’s no doubt about it.

How important exactly can be dependent on your goals.

Breakfast has always been advocated as a must for anyone who wants to lose weight.

However, most of the claims around this originate from the observational evidence (study) that – due to eating early in the day – you’re less likely to over consume calories later on.

The opposite, skipping breakfast (intermittent fasting) is also seen as a miracle weight loss strategy, however, this is mainly due to the fact that calories are lower (from skipping them) instead of it being caused directly by the timing.

These results go against what has been regularly promoted by many official nutritional guidelines, which encourage eating breakfast as one of the key strategies for maintaining a healthy weight. This recommendation is based primarily on observational data showing an association between breakfast consumption and lower weight and fat mass.

However, there are some benefits outside of weight loss that we might want to pay attention to, particularly in the field of health.

Blood sugar control is better in the morning, meaning we can get away with a higher-calorie breakfast (study) and one study even found that fasting until noon, increased the rise in blood sugar after lunch and dinner in people with type-2 diabetes. (study)

And lastly, it’s been proven to help with concentration and brain function (study); however, this evidence is primarily linked to children.

But how about eating breakfast for muscle growth?

As mentioned in our article about protein, you can only trigger protein synthesis with up to 20-40g of protein (study, study). Depending on your protein needs, having a small amount of protein, or skipping breakfast all together, leads to you missing out on potential muscle growth.

Not only that, but as carbs are a crucial macro for muscle growth and easy to consume in high abundance (study), you could be missing out on an opportunity to get your carb macros in.

All by skipping breakfast.

If you habitually train several hours after eating a carbohydrate-dominant breakfast, skipping this might negatively impact your performance in the gym (study).

Having a lack, or lesser amount of carbs in your breakfast comes down to 3 things:

What about consuming more calories at dinner?

Personally, this is where I like to consume the bulk of my calories.

Big meals with friends and family, no awkward situations when I’m out and overall better sleep.

But what does the science say?

This is where things get interesting, because many of the benefits attached to an early breakfast have also been shown to apply to the dinner group in other research too.

The main points revolved around its effect on body composition, primarily fat-loss (study).

According to research, insulin sensitivity peaks in the morning, giving your body the trigger to store glucose both into fat and muscles. Which is why consuming carbs and calories later in the day most likely became popular (study).

Another study published in 2011 split 70 Israeli police officers into two groups, the first group ate carbs throughout the day, and the second ate the bulk of their carbs at dinner time.

In the same study, the second group benefited from reduced inflammation, glucose control, and improved blood lipids too (study).

Not only that, but a 2015 study showed that Type I diabetics, and those with glycogen storage disease need to consume calories before bed for survival (study).

So which one is best, more calories at breakfast or dinner?

The main issue revolving research on meal scheduling is that the majority is not geared towards muscle growth. The participants who have been studied are far from ectomorph status. Instead, they’re typically your average joe, or the opposite, athletes.

As you can see, research is contradictory and all over the place with studies leading to the same conclusion (benefits) with different routes of getting there.

So which one is most important for muscle growth?

The reality is, neither is majorly more beneficial than the other, be that for muscle growth, fat loss or overall wellbeing.

What’s more important is to rely on strong evidence.

Intermittent fasting – what about skipping breakfast?

This is the reason why meal schedules have become even more popular in recent years.

We were taught for so long that breakfast was the most important meal of the day (and some studies show it still is, including this source).

However, the idea of skipping it to receive a lot of health benefits seems pretty convincing, huh?

Research around intermittent fasting has shown a lot of health, and fat loss benefits like:

With all of these benefits, why don’t I recommend that you follow intermittent fasting? After all, everyone and their mum seems to be prescribing it as a fat loss and muscle growth miracle.

Of course, for such a big topic, there’s so much that could be said about this…

My thoughts and recommendations for meal scheduling

The main thing that’s necessary, regardless of when you eat, is including protein to maximise protein synthesis, and getting in calories throughout the day.

I don’t recommend skipping breakfast or saving all your calories to eat until the later part of the day. Regardless of the meal frequency approach you choose, skipping meals is only going to make it harder to consume the large number of calories needed to build muscle. It would be tough for someone with a bigger stomach, nevermind an ectomorph (study).

Is changing when you consume your calories worth the effort?

Nope, pretty far from it.

There’s not enough evidence to show that consuming the bulk of your calories at breakfast, or lunch, increases or decreases muscle growth beyond:

Aside from these two things, it comes down to personal preference, and whether you prefer having a bigger breakfast or dinner.

I prefer a bigger dinner. But you might have a weaker appetite and prefer to spread your calories and macros evenly throughout the day.

Either way, you’re guaranteed to hit your goals instead of starting light and struggling as the day goes on.