Should you change your calories and carbs on the days your training off vs on days? 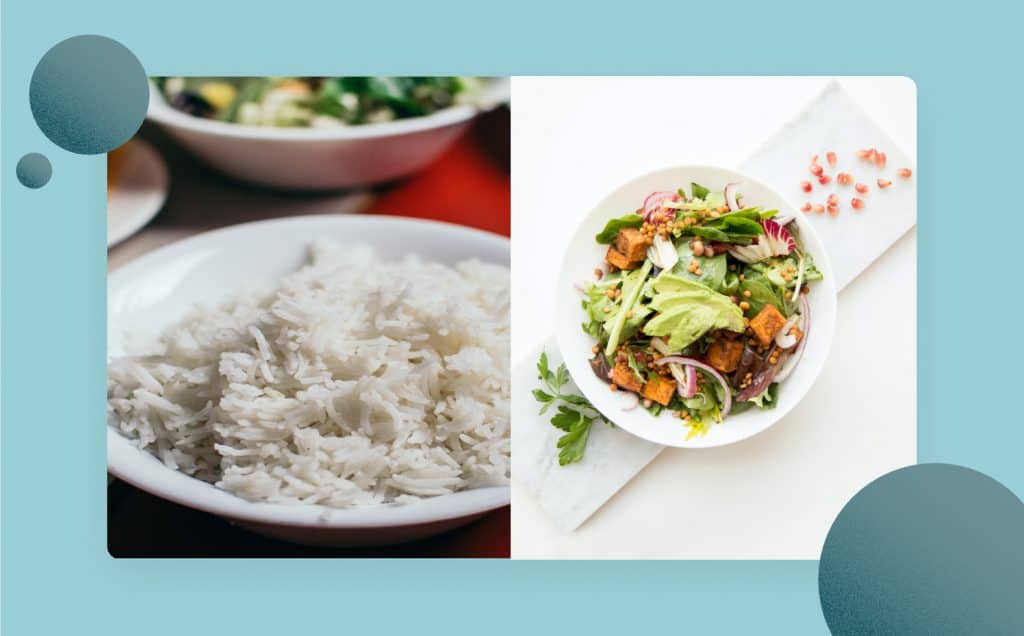 I remember when I first read about calorie cycling. It was in an issue of muscle and fitness magazine.

The article claimed it was the ultimate way to time your nutrition if you wanted to build muscle, and maximise fat-loss (or stay lean while bulking).

To the right-hand side of the diet was a guy wrapped in a tank top, juiced up to the max with nothing but oil on his skin.

At the time I had built some muscle (around 15 lbs or so), so I thought, this must be the secret I’d missed all along. It was the secret to having my cake, and eating it too (literally).

So I tried it.

But before I get into the results and how it affected me, let’s talk about what it is.

What is calorie and carb cycling?

This is where you cycle between different amounts of calories and/or carbs on certain days vs others.

The standard rule is, one day is higher than the other (be that in calories, and/or carbs) and that day tends to be a training day. Protein is consistent throughout all days and is the variable that is unlikely to change.

So what did I do?

On days when I trained, I consumed both more calories, and more carbs. On my days off, I lowered my calories to the amount I needed to maintain my current weight

At this point, I was no longer a skinny guy. Going off memory, I maybe had gained 30-40 lbs at this time, so I wasn’t a noob in the gym.

My attempt to follow it through wasn’t that successful back then. I stuck with it for a few weeks and then returned to my usual pattern of high carbs and calories every day, regardless if I trained or not.

Fast forward a few years, and I attempted it again. This time, for a different reason. I hired a coach. He had me changing my calories and tampering them down as the week went on.

After several weeks, I had done exactly what that magazine had promised me.

I’d lost fat and built muscle at the same time.

So calorie and carb cycling must be my best friend, right?

I didn’t know for a fact that nutrient cycling was the reason for these results. After all, I did a few things:

So what does the science say about calorie and carb cycling?

The research is all over the place. Mainly to do with the variety of reasons why someone would want to cycle their nutrients.

You’ve got people who want to improve the way their body looks (mainly wishing to lose fat), timing it around events (carb loading before a photoshoot, or bodybuilding show) or for sporting events, like a marathon or long activity.

However, for this, we’re going to look at it from a perspective of an everyday person (and a skinny guy) who wants to improve the way they look and maximise muscle growth.

What is the typical approach to calorie/carb cycling?

As mentioned, there are several different, yet common strategies for nutrient cycling, such as:

This is due to the idea that we’re trying to match our carbs and calories around when we use them and need them the most. This method has been shown to help us with insulin sensitivity allowing us to get the best of both worlds. (study)

Becoming a fat-burning machine on days off and building muscle on days on.

You’ll also find this approach given to someone who’s on a strict diet, due to its effects on manipulating leptin and ghrelin levels:

When leptin decreases and ghrelin levels increase, this leads to more hunger, increased appetite (wanting to binge more) and a decreased number of calories burned at rest (study, study).

Yet this isn’t likely a good reason, as leptin levels take several days of being in low-carb/calorie state to become an issue (study, study).

Which is a reason why cheat days are popular…

A cheat day every seven days

This is when most people take a break from their diet every week (usually during a weekend and every 7-days). This is used as a hormone manipulator to help sort out leptin and ghrelin levels when dieting for a consistent amount of times. (study. study )

However, this is where most people who are bulking get it wrong.

A cheat day typically consists of consuming food that’s high in calories. And usually from foods that have excess fat and carbs, rather than from foods that help you hit your macros. Because of this, most cheat days, lead to more fat-gain than needed.

A cheat day isn’t needed when every day is already spent in a surplus of calories. There are no benefits to it, other than your sanity of eating chicken and rice all the time.

However, if that’s your diet, then you probably want to fire whoever gave you that and opt for foods that are tastier and don’t have you counting down the days to your binge.

Of course, you can make up for these extra calories by lowering them on another day (study), and this evens things out to be more like a lean bulk.

We’ll get to strategies for accomplishing this in a minute.

Just know that using a cheat day as a strategy for further growth, or because it’s typically spoken of a way to burn fat, is flawed on a bulking diet, no matter if you feel you can get away with the fat or not.

Most of the research around nutrient cycling hasn’t looked at muscle growth in particular.

The research that has been done has been around workout nutrition and pointed to carbs aiding with recovery and glycogen replenishment (study).

As discussed, this isn’t strong enough evidence to support the idea of carb cycling being beneficial for muscle growth (vs workout nutrition).

Carb loading and cycling carbs have been shown to increase performance (study).

If trying to maximise muscle growth without the worry of fat-gain (due to you not being too bothered about it right now, or the fact that your ectomorph genes stop you from gaining it, quickly) then there isn’t any significant benefit to it vs eating the same amount each day. It may limit your potential due to the fact that you’re limiting your carb intake, which is essential for maximum muscle growth.

One study showed that a diet lower in carbs impairs post-workout cell signalling related to muscle growth (study) however, cycling for a bulking diet is never done with low-carb days (as we’ll get into soon).

Another found that when athletes followed a low-carb diet, resting stress (cortisol) levels were higher, and overall testosterone levels were lower (study).

There have been a bunch of studies that do show that carb backloading, another form of nutrient timing, has been effective with contest bodybuilders.

The biggest study had researchers compare competitors who entered a positive energy balance by consuming 8-12g/kg of carbohydrate the day prior to and day of competition, with those who ate roughly maintenance calories by increasing carbohydrates to ~5g/kg. The results were increased muscular thickness, girths, and the appearance of size (from both measurements and judges comments) (study)

However, it’s wise to note that they were bodybuilders and the same results likely won’t apply to someone who hasn’t hit their genetic potential (and is on a bulking diet).

Let’s get to the fun part.

What to actually do with calorie and carb cycling.

The strategy you use depends on your goals and why you want to use nutrient cycling in the first place.

As this is part of a bulking guide for skinny guys, I’m going to focus on the two kinds of people that this guide will benefit, and strategies to help them (vs all the different types of carb/calorie cycling methods out there).

Starting with the kind of person that needs it the most…

If you’re currently a skinny-fat (fat to lose and muscle to gain), then this will be your best friend.

This will allow you to maximise the calories and macros you need to build muscle, yet keep them low enough on the days they aren’t “needed” to keep fat gain to a minimum.

If you’re a beginner and haven’t gained 10-20lbs already, then you stand a chance of being able to gain muscle and lose fat at the same time (study) This is what is often referred to as “noob gains. However, I wouldn’t go into things expecting that. Instead focus on keeping your muscle growth lean, as to not become muscular-fat.

01 – On the days you train, you’ll want to consume The Anabolic Adventure (AA) Method but limit the carbs in it to around 1:1 ratio. Keep your calories and macros in a surplus.

02 – On your days off from training, cut out carbs in the morning and obviously, remove The AA Method.

If you’re genuinely a skinny guy that struggles to gain any fat, then you don’t need to do any form of cycling to get results.

You can just eat the same thing every day and get great results.

However, if it’s something you do feel inclined to do if you want to give your gut a bit of a break, or just fancy changing things up (look at you being adventurous) then here’s what I recommend.

As spoken about already, cheat days are a common strategy for nutrient cycling. However, they’re not that wise when it comes to a bulking diet.

A cheat day that does the opposite of what normal cheat days do. 1

The typical cheat day has you consuming extra calories on one day of the week, where this approach has you doing the exact opposite and coming down in your calories for that day.

01 – Keep your protein intake the same as the usual

04 – Keep this the same day each week. Personally, for me, I like to do it on a Sunday.

Alternatively, just removing your workout nutrition shake, like The Anabolic Adventure Method, can be enough for you to go into less of a calorie surplus.

Calorie and carb cycling isn’t magic or necessary for most people.

Other things are more important…

The reality is, using carb or calorie cycling isn’t going to make or break your success. If you’re struggling to build any muscle, or staying lean at all whilst bulking, then this isn’t going to fix things suddenly.

Your calories and overall macros are what will be the deciding factor (if you’ve got a quality workout program).

This is the extra 10% that can contribute to better insulin sensitivity, staying a bit leaner and helping you get the extra mile.

It’s for that reason, that unless you’ve made a big progression in muscle growth, or fat-loss, then we don’t give it to anyone in the first few phases on our programs. It’s not needed. It takes away from the focus on the bigger picture.